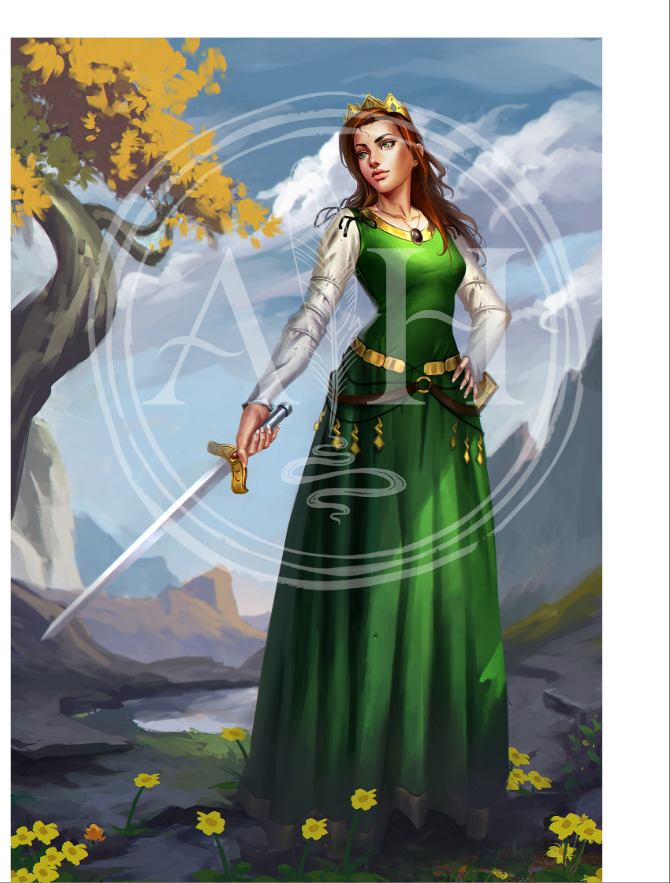 The only child of King Edward and the late Queen Victoria of Warren. The first princess born in over a thousand years. She vanished just before her fifth birthday when her mother was murdered and she was spirited away by friends of her parents to keep her hidden and safe. Tragically, most of those friends were also killed, and she was lost.

Alex grew up disguised as a boy, with her bodyguard acting as her overprotective brother, in a band of orphaned boys hidden in the Dark Forest. Only they knew that she was really a girl. A magical amulet gifted to her mother from the sorcerer of Datten, disguising her from the world, by making her appear as a boy. When word hits the camp that knights of Datten are in town looking for her, she learns of her grandfather's death, meaning it's time for her to come home.

She’s thrown into a world of knights, balls, dresses, royal protocol and expectations that she struggles to achieve, all while trying to figure out how to control her ever-growing powers, and discovering the secrets that led to her mother's death. She soon finds a few allies in her journey to become a proper Princess and make her father and mother proud of her.

Bio:
Prince Aaron is the youngest son of King Emmerich and Queen Guinevere of Datten. He became Crown Prince upon the death of his older brother Daniel, and now refers to himself as ‘the spare who became the heir’, much to his mother’s displeasure.

Growing up in his perfect older brother’s shadow, and being the polar opposite personality to his father, Aaron often found himself at odds with his authority figures. His kind and humble nature didn't fit with the powerful, war hungry kingdom he was born into. He spent much of his youth hiding in Warren with his godfather, King Edward. As he grew older and needed less supervision, he is rumored to have found trouble, but in reality spent his time helping his people and figuring out his version of the king he wants to be. Though the only rumored incident that could be verified conclusively is the time he set the royal pigs loose in the castle.

No one expected him to try to shape up and actually start playing the part of a Datten Crown Prince until a day in the woods, and an arrow in his shoulder would change his life forever. 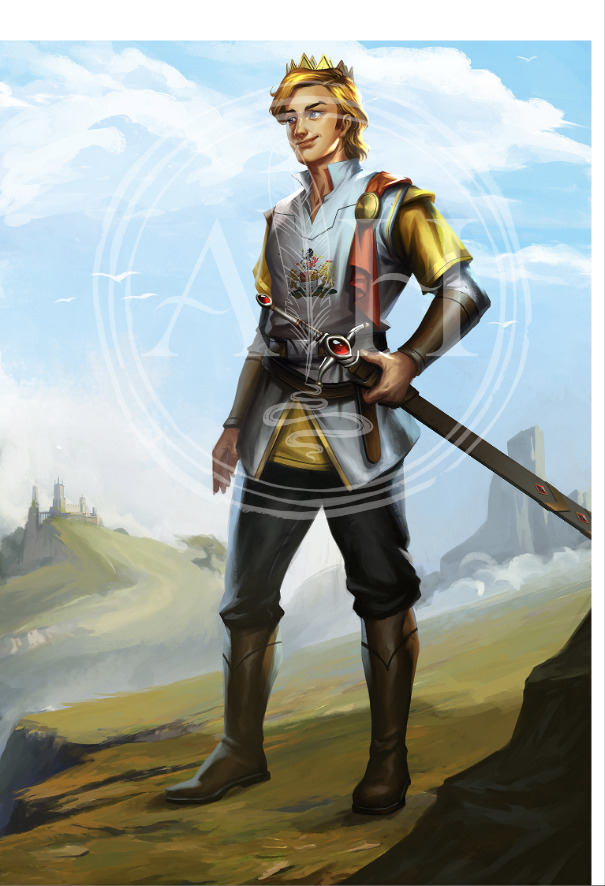 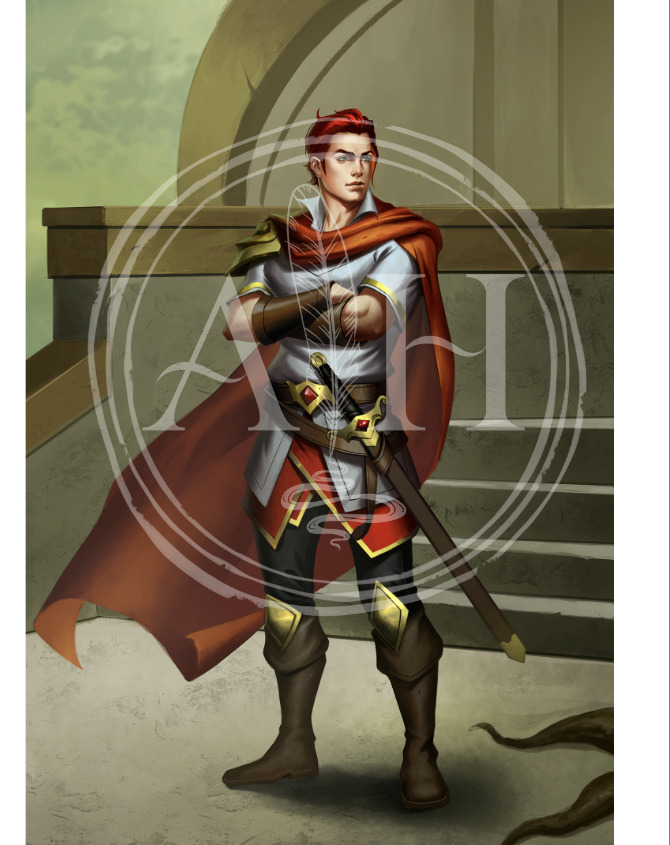 The oldest son of the General and Head Guard of Datten, Stefan spent his youth surrounded by his six little brothers and sisters. When he was eleven, the Princess of Warren was brought and hidden in their family after her mother was brutally murdered. Soon after she arrived, a fire started killing Stefan’s mother and his siblings, but he and the princess were playing nearby and they were able to escape into the Dark Forest.

For twelve years, he helped hide Alex from those who wanted to hurt her. The roles they played were that of brother and sister in front of the others. With the help of her best friend Michael, Stefan taught her honor, loyalty, history, riding and how to defend herself so she could protect herself if needed. Being the only one to know who she really was made their bond grow closer as the years went on.

After Alex is found and brought back home, she demands Stefan stay in Warren with her. Stefan struggles to give up his role as sole protector of Alex and finds himself at odds with the rules and restrictions set out by the knights about how a knight should guard his Princess.

The only son of Merlock, the sorcerer of Datten. Megesti was born in Datten rather than the magical Forbidden Lands, where all the sorcerers come from. He is half mortal, having received his only powers from his father. His family comes from the lines of Merlin and Cassandra giving them healing and exceptional skills in other line powers. But at sixty-seven, Megesti still struggles with some of the more common spells.

He grew up with three generations of Datten royals, and is close with Prince Aaron, which leads to them being picked to help find the lost Princess of Warren together. After she is found, he returns to Warren with her to assist in teaching her about the noble families of Torian and other facets of royal life. He also helps provide a link to the secrets their family hides and helps Alex figure out the magical gifts that her mother passed on to her. 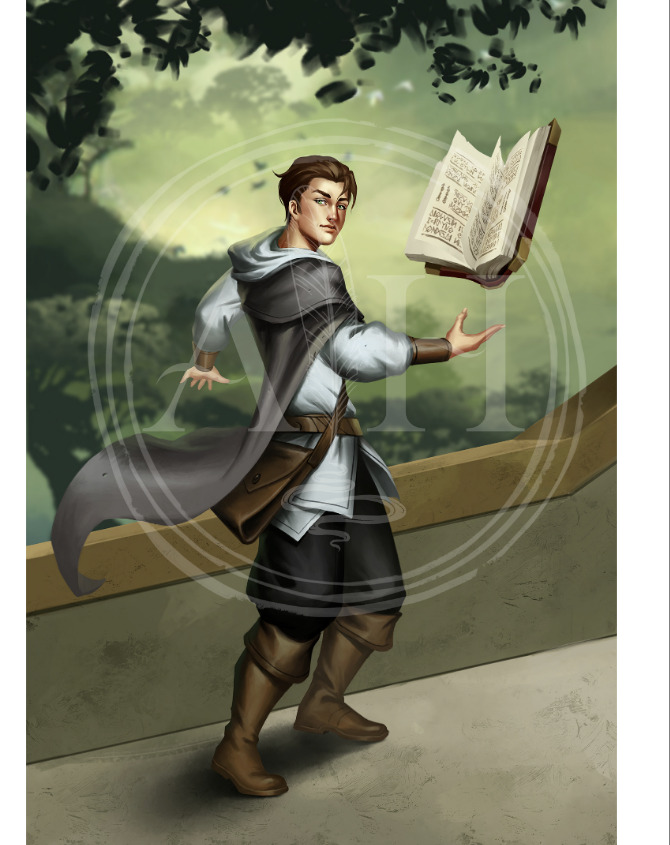 Michael is an orphan who remembers nothing before he ran into Alex in the Dark Forest when he was only six. The funny little girl disguised as a boy brought him home with her, which got him a bed, food and a family. Michael has never forgotten that kindness and has been Alex's best friend since that day in the woods.

When Alex's secret is exposed and her world is completely turned upside down, Michael willingly gives up the life he knows to follow Alex and make sure she isn't alone on her new journey. He stands by her side with the love of a brother and provides some much needed humor and tension relief in Alex's new life as a princess.

Edith is the youngest daughter of Randal Nial, the General of Warren. She grew up in Warren with her older sisters, but preferred to spend her time with General Bishop’s three sons, making Sir Julius her best friend.

Raised in Warren where women are allowed to do more than Datten, Edith grew up learning to ride, fight and use a bow better than anyone her father knew. When the Princess of Warren arrived home, as the only unmarried Nial daughter she is assigned to help her adjust to life in the castle, and becomes one of her lady's maids.

Very quickly, the Princess and Edith become close friends along with Lady Jessica, making the ladies responsible for trying to control the antics of the wild princess. 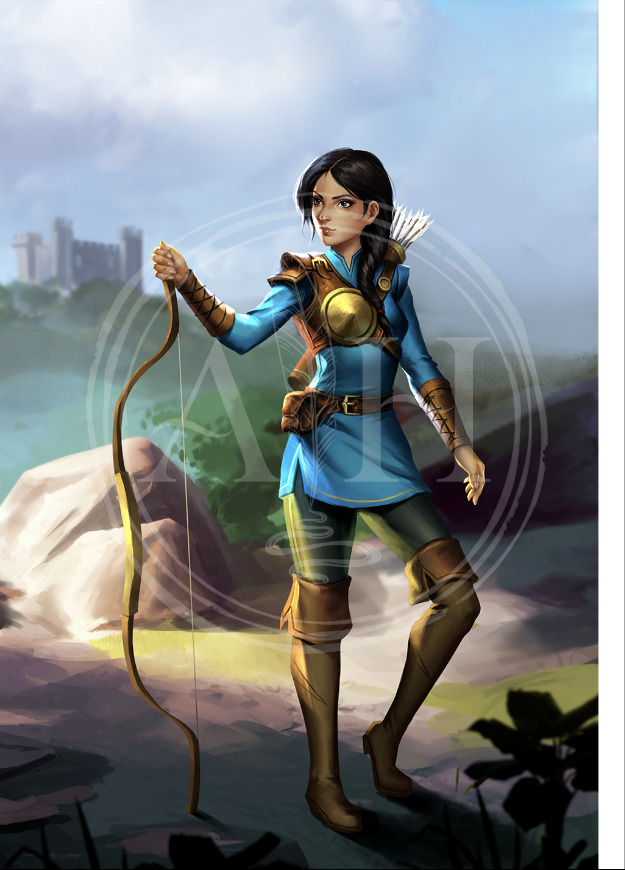 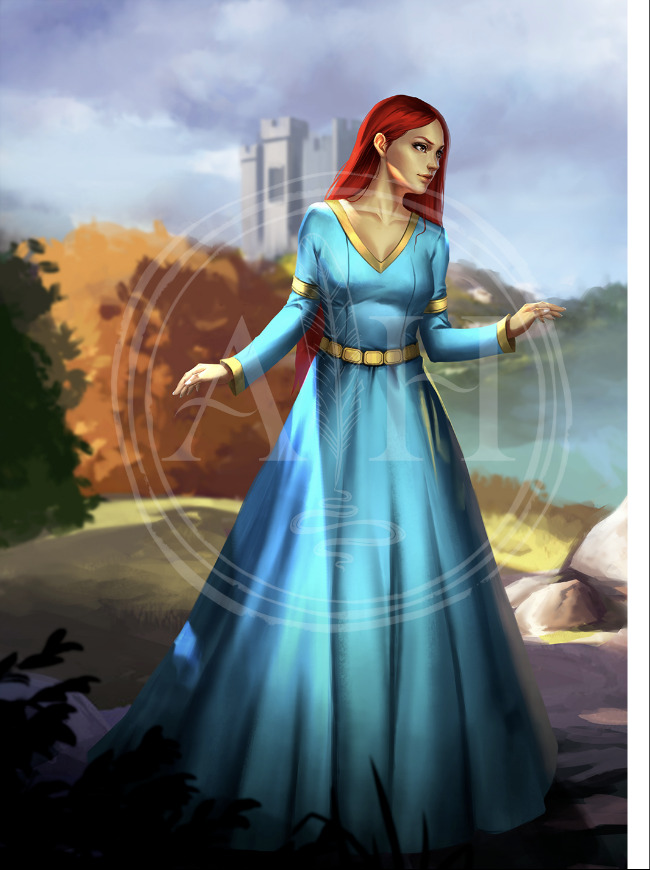 The only surviving daughter of the General and Head Guard of Datten, Jessica, was the third oldest Wafner child. When she was five, a fire ravaged the Wafner home, killing everyone except for her and her father, who were away when it broke out. Years later she learned her oldest brother, Stefan, also survived the fire, having run off into the woods to protect Princess.

After her family’s tragic death, Jessica spent her youth in the castle with Prince Aaron and Queen Guinevere while her father accompanied King Emmerich on his travels and battles. The Queen of Datten saw that Jessica learned all the skills and mannerisms necessary to be a proper Datten Lady. It was hoped she’d be a calming influence on Prince Aaron, but he proved too stubborn.

When the missing Princess of Warren is discovered, Jessica accompanies the Datten King and Queen to Warren. There she is tasked helping tutor the princess in royal etiquette and helping her acclimate to palace life and learn to properly behave as a royal. But the biggest surprise for Jessica comes in the discovery of her brother being alive, and having been the one protecting the princess that entire time.

Cameron is the only son of the Earl and Duchess Strobel of Warren. Through his father, he's related to the royals of Datten, as Guinevere and Cameron's father Bernhard are siblings.

The Strobels are known as the best horse breeders in all of Torian, and their stallions are sought after by nobility and royalty alike. Cameron was practically raised in the stables at his father’s side and is known throughout Torian for his gentle nature and exceptional skill with horses. He’s also an exceptional jouster and works at the Datten royal stable looking after the king’s horses, as most of them came from their stables.

Having grown up in Warren, he knows the traditions and families and Edith, and is an exceptional young man who has quite the reputation with the ladies. 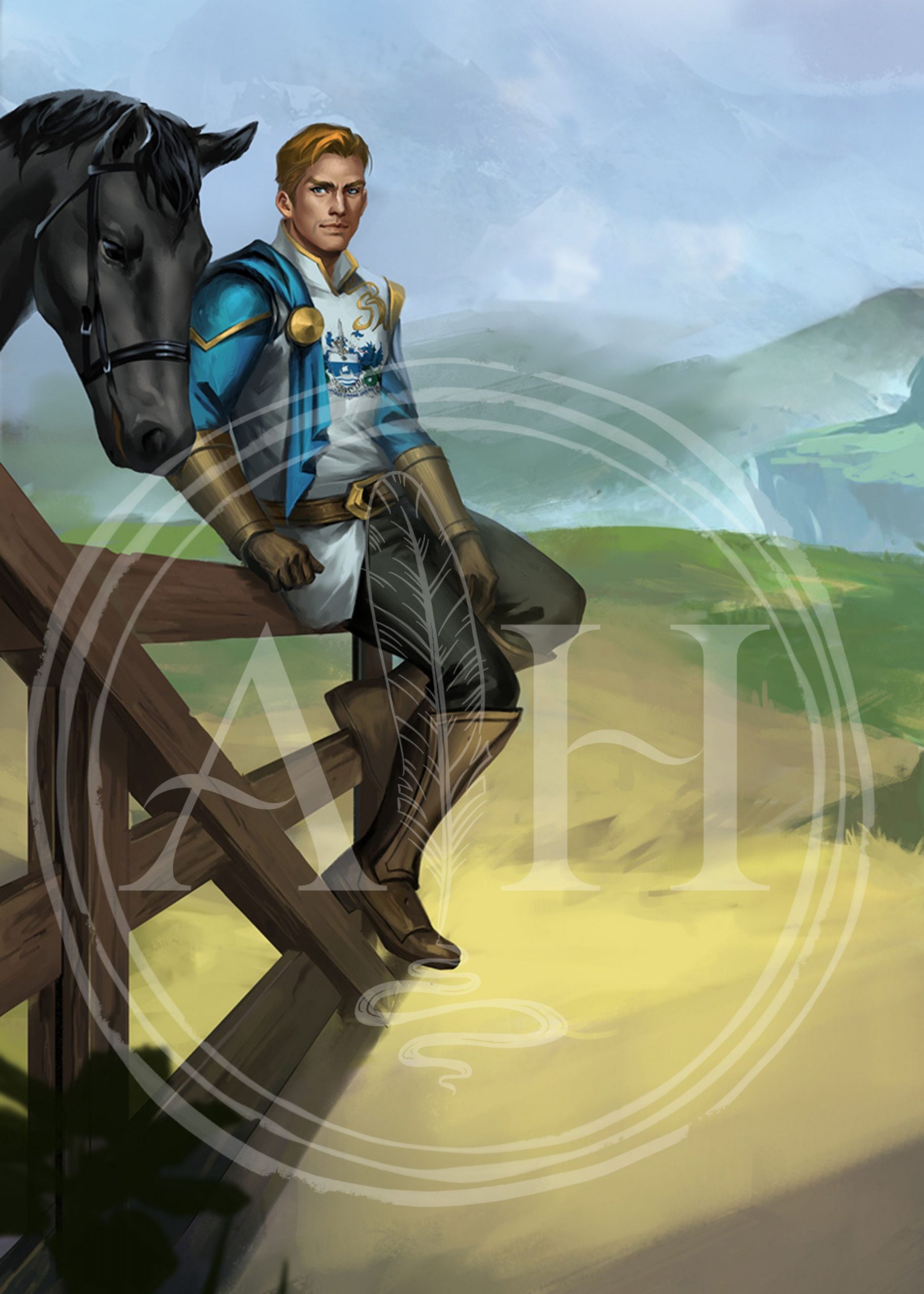